Patrick Reusse in Cooperstown: Cuba might be where he's from, but Minnesota is home now

Tony Oliva could have spent his offseasons in sunny Miami when he was with the Twins, but he soon found he would rather spend them in Bloomington.
By Patrick Reusse Star Tribune
Save
Tap the bookmark to save this article. View saved articles.
Text size
share
tweet
email
Print
more
Share on: Share on LinkedIn Share on Pinterest
Purchase: Order Reprint

Follow along this weekend as Star Tribune columnist Patrick Reusse makes his way, eventually, to the heavily Minnesota-flavored National Baseball Hall of Fame induction ceremony on Sunday in Cooperstown, N.Y. Reusse's trip won't be like the ones that others are making. For one thing, there's a detour through Canada. For another, there will be characters that you won't meet elsewhere.

There is amazement that a lean kid from a plot of land in the tobacco fields of westernmost Cuba could find himself on the radar of the most famous baseball scout in the country.

There is wonder that this man was on the way back to Cuba after only a brief tryout with the Twins. He was saved that fate by the Bay of Pigs fiasco that shut down travel to Cuba.

American League batting titles in his first two seasons, then a third in 1971. He won that one playing the second half on one leg after ruining his left knee with a diving attempt in Oakland's right field.

These and many more moments are part of the Tony Oliva story that enthralled early Twins followers from the time the Sporting News informed us he had batted .410 for Wytheville, N.C. in a rookie league.

Yet, the shocker of all for me was emphasized again Sunday in Cooperstown, N.Y. And that would be the fact Tony came from weather paradise, wound up in our Frozen Wasteland and never wanted to leave.

Now, whether in attendance or watching on the MLB Network, it was clear that our guy Tony was beyond nervous as he looked at those 30,000-plus waiting for his thank-you speech Sunday.

When Tony started in, he got caught between thoughts and just told the audience he loved Minnesota.

There were a couple more of those and, near the end, Tony emphasized that Minnesota was his "home."

I'm not provincial about such matters, generally. But I do think it's spectacular that when we go back to the first collection of Twins stars, the one that settled down in a Bloomington neighborhood was the kid that scout Papa Joe Cambria secured from the hinterlands of Cuba.

Obviously, marrying Gordette DuBois from Hitchcock, S.D., in 1968 had considerable influence on that decision. But in the end, with family, friends and Twins fans, this was where Tony wanted to be.

There was a discussion of the strength of Tony's Minnesota-dom at a Twins gathering on Saturday night.

Amazing travel companion John Sharkman had this one: "I was working for the Saints in St. Paul. Jackie Hernandez was a coach. I would talk with him about Cuban baseball.

"One day he said, 'I'm going to this Cuban guy's house for a barbecue. You want to go?'

"I'm in. We drive to this neighborhood. We go inside. I see evidence of three big-league batting titles.

"I say to Jackie, 'The Cuban Guy is Tony Oliva?' He says. 'Yeah, he's around here somewhere.'

Tony has been around us for 60 years. He's an all-time favorite Twin as both a player and personality.

Tony wanted this badly, and a sense of that is probably why Minnesota wanted it so badly for him. 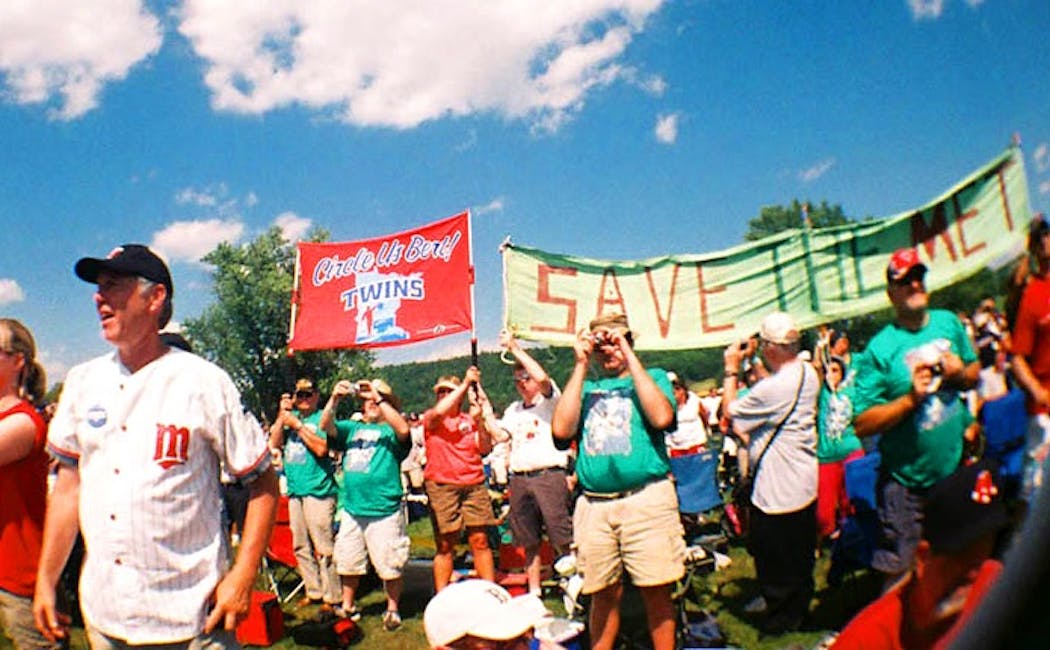 Ballpark Tours photo
The Save the Met banner was unfurled at the 2011 Hall of Fame induction.

There was communication with Julian Loscalzo last week and he revealed the "Save The Met" banner would wave for the last time on Sunday at the Hall of Fame ceremonies in Cooperstown.

That grassroots fight against a new domed stadium took place in the late 1970s. Loscalzo and his many like-minded cohorts had only determination and we-the-people arguments on their side against the Vikings' threats and other economically powerful groups intent on getting a dome built.

The showdown came at the end of the 1979 Legislative session.

"It was after midnight, and we had won a delay by a couple of votes, but we knew they would be coming back at us," Loscalzo said. "We were sitting on the steps of the capitol, having a couple of beers, and the discussion became, 'What are we going to do when this is all over and they have their dome?

"And one of our people, 'We're going to stay together, rent a bus for a week in the summer, and go see outdoor baseball in all kinds of ballparks.' "

Loscalzo nodded toward a round table of fellow travelers in a Utica, N.Y., hotel bar this weekend and said:

"That was the start of Ballpark Tours." 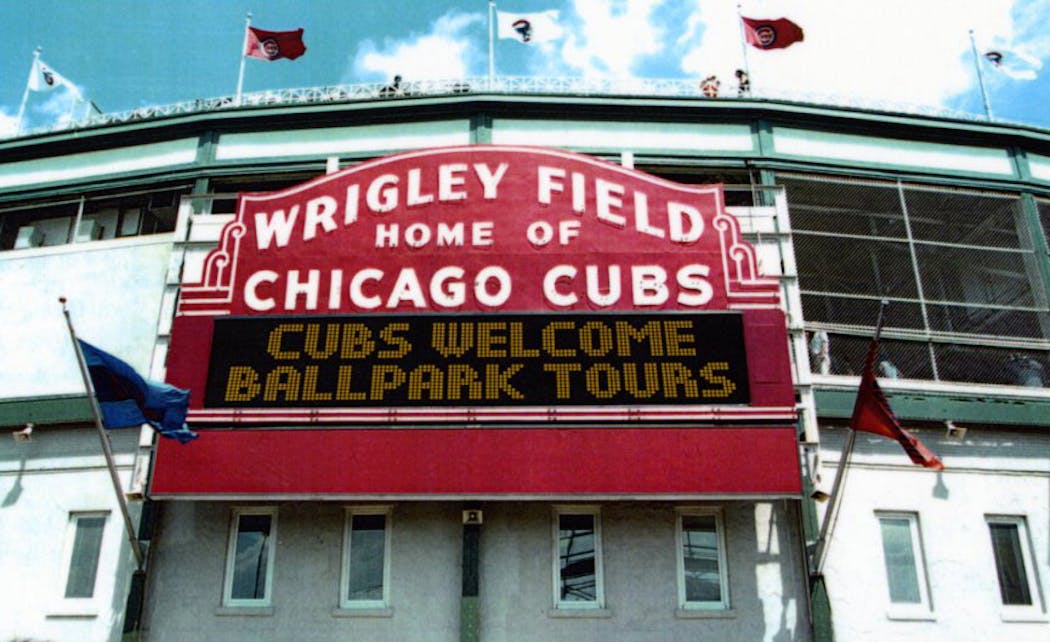 And this is it? You're donating the Save the Met banner to the Minnesota Historical Society and giving up the organized annual trips after four decades and this weekend?

That was my interpretation of our recent communiques.

Loscalzo looked around the round table in which conversation had been flying and said: "No, no … I was relaying this would be the last time the Save the Met would fly — at Cooperstown. We might have trips in our future."

Perhaps to Cuba, where the Ballpark Tour loyalists have made their annual trip a pilgrimage to the land of Tony Oliva three times in the last decade.

"We had a fourth planned, but it was cancelled with new complications in Cuban travel and also the pandemic," Loscalzo said. 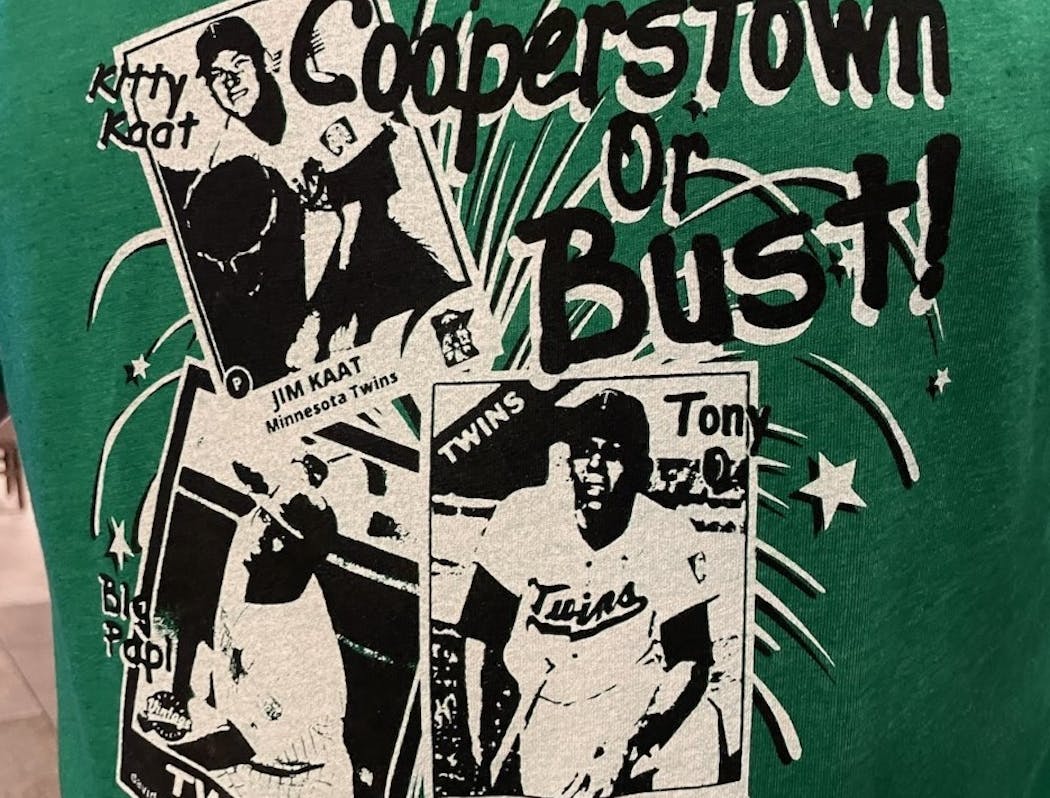 This has been the fifth trip to the Hall of Fame — and the second time at a hotel in Utica, 35 miles away and 300% cheaper than lodging in Cooperstown.

Ballpark Tours made all the Twins-centric visits to the Hall of Fame, other than Kirby Puckett's induction in 2001.

How could it be the one missed as a group was KIRBY?

"That was a divorce year for me," Loscalzo said. "I was counting up and we've had eight marriages within Ballpark Tours. Divorces would only be a guess. I've had two, which doesn't count the breakup of a long-term relationship where we didn't get married.

Yes, but lots of wonderful ball yards in places off a beaten path and/or exotic in tradition (Cooperstown, Cuba, etc.), right, Julian?

And lots of laughs, as I can attest from happening to be in same Utica hotel as the 24 folks on this Ballpark Tour.

The other night — actually, 2 a.m. — there was such loud conversation and uproarious laughter that I made the assumption it was coming from within Julian's thirsty gang. So I sent a text to Loscalzo with a harsh description of the scoundrels preventing me, a super senior, from getting my needed sleep.

Julian denied involvement immediately. At mid-morning, he texted that research indicated it was Save the Met-ers raising the ruckus next door, but there was an excuse:

"Marty was doing his Sid impression."

Well, then all is forgiven. Even past curfew for seeking a night's rest, who among us could not howl with laughter through hotel walls at a Sid impression from a well-lubricated Marty Higgins?

Patrick Reusse is a sports columnist who writes three columns per week. Write to Patrick by e-mailing sports@startribune.com and including his name in the subject line.

A look at what's happening around the majors today:
Sports
1:50am

Justin Verlander has a little more gray in his hair and stubble these days.
Sports
1:50am

David Ortiz promised to speak from the heart. As usual, Big Papi delivered.
Sports
1:41am

Rockies come into matchup against the Brewers on losing streak

Nigerian Amusan gets world record on wild night in hurdles

First she set the record. Then she won the medal.